Is there a difference between a barber and hair stylist (AKA Cosmetologist)?

As a female barber I often find myself correcting people when they call me a hairstylist or call my shop a salon (it has ZERO salon vibes!?). That’s when I’m followed up with the inevitable question, what’s the difference?

While every state has slightly different rules governing hair stylists and barbers, I personally attended barber school in Baltimore MD, so I will explain the difference as per those state requirements.

It’s important to note, it is perfectly legal for a hair stylist to perform a short mens haircut and for a barber to perform a long women’s haircut. However, based on schooling alone- I would never recommend either.

The most notable difference is that you will most often find a barber working in a barber shop, and a cosmetologist working in a hair salon. However, if a shop is licensed to employ both, it is perfectly legal for them to work in either/or. Which is why you will commonly find cosmetologists working in chain barbershops; they are more abundant and often these large corporations need to fill chairs.

The second most notable difference is that barbers tend to cut short hairstyles while cosmetologists tend to cut longer styles. Why is this, if they can work in either shop and legally cut either type of hair?

Note: There is a significant difference in the number of cosmetology and barber schools (we will explain this at a later date as we dive into the history of barbering).

Barbers can not legally provide esthetic services or nail services; cosmetologists can not legally use a straight razor. That doesn’t mean they don’t perform these services, it just means legally they aren’t supposed to. It also means, more than likely they are not going to be very good at them (unless they have performed a lengthy apprenticeship).

In the state of Maryland you must complete 1200 hours of barber school to apply for the test to receive your license.

Learning how to properly use clippers, shears and straight razors with a satisfactory outcome takes time.

(Also note- You can learn a lot in a you tube video, but being a professional barber or stylist isn’t one of those things)

I’d like to keep this brief, so I will end this here, and hope I provided enough information for a general understanding of the difference between the two. While it is clear that the majority of barbers tend to be men and the majority of cosmetologists tend to be women don’t assume one way or the other. 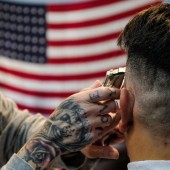 This is why your haircut sucks

How To Make your own beard balm

How to give yourself a straight razor shave